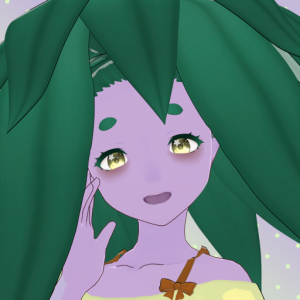 Being a plant, human notions of gender do not apply to Shandley. They will accept English pronouns they/them, it/its, or fleur/fleurs/fleurself.

Shandley is a European mandrake (Mandragora officinarum). Their appearance changes with the seasons. Shandley will grow flowers in spring, have fewer leaves in summer, have berries in autumn and have only leaves in winter. Their total height also varies slightly with the seasons, but they are approximately 40cm (16 inches) tall including the terracotta pot they usually reside in.

Because plants do not use calendars, Shandley's age and birthdate are unknown.

Shandley is a mandrake who grew up in a colony of other mandrakes. They spent their very early years fascinated by the humans who lived nearby and tended to the plants in the valley. The other mandrakes did not approve of Shandley's interest in people and would often scold and shame Shandley, trying to get the young mandrake to behave more like the rest of the colony. Eventually, the humans became older and passed away, leaving the house and valley abandoned. Shandley grew older and realized that they felt starved of the human attention and care they had become accustomed to as a seedling. Shandley would often sneak away at night to observe humans in nearby homes, to the admonishment of the other mandrakes. Eternally stubborn, Shandley would only keep disobeying. Through watching humans, they were eventually able to speak and understand English somewhat fluently.

One day, a heavy storm caused a flash flood that threatened the valley. Shandley knew enough English to understand the flood warning that sounded, but the other plants didn't believe them when they tried to warn the colony. The colony tried to forcibly make Shandley stay put and accept whatever fate the rain would bring, as their ancestors had always done. Fearing death, Shandley uprooted themself and let the water carry them away as they watched the other mandrakes be ripped apart by the tide.

Weak and injured from the ordeal, Shandley woke up next to a misplaced cellphone that was playing an unnamed VTuber's stream. The kind voice made Shandley feel more relaxed. The owner of the phone appeared and was surprised to meet a talking plant. The Human nursed Shandley back to health and the two have been friends ever since.

Shandley noticed how much joy and comfort VTubers brought to both themself and to their new human friend. Shandley decided that they wanted everyone to experience that kind of happiness, and that the best way to do this is to become a streamer too. After many typing lessons and lots of English practice, Shandley is ready to make friends with all the humans!