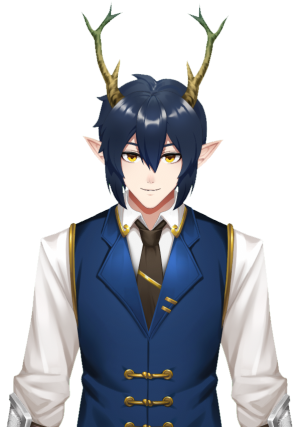 Seiryu is a VTuber and Streamer who makes content in English and sometimes mixes in Japanese. Associated to Pandemonium -パンデモニウム- alongside with Kisaragi Sekai, Shuvi von Chamillet, Yasai Yuki and J.I.A

The Azure Dragon was worshipped by several civilizations of Mankind. He governed over the Spring Season and ruled over the Eastern Heavens. Fascinated by Humanity, he has chosen the name “Noir” as a reminder of the color his scales would change to should his pearl ever break. However, when conflict arose among the Four Gods, he was banished and crashed into the Earth. With the dragon’s pearl shattered and its pieces scattered across the globe with specific memories & powers, the dragon god reverted to a Condensed Form: Yellow horns, black scales, a smaller stature, and ocean-blue eyes. Determined to restore himself to his original form, regain his full powers and memories, he set out to search for the remaining fragments.

In his Condensed Form, Seiryu still has a versatile skill set despite the limitations. Along with the ability to fly and freely command both water & lightning, the Azure Dragon is a skilled martial artist with a naginata and hand-to-hand combat. Although Seiryu is capable of shapeshifting like all Eastern Dragons, he’s really reluctant in doing so. In his True Form, Seiryu is said to be unrivaled among the Four Gods, but that is yet to be seen by mortal eyes.

When the Azure Dragon was out searching for more fragments, he encountered an unknown monster he has never seen before in the history of the Earth. When it stood in his way, Seiryu halted the surrounding raindrops mid-air and sent them to pierce through the monster at high speeds followed by a strike of lightning. When the battle ended, he realized too late that he stood out instead of remaining hidden like usual and doing so attracted the watchful eyes of a Magic Caster and an Assassin since the start of the conflict. Slowly coming to terms that he can’t find all the fragments by himself and curious to learn the mysteries of the unknown monsters’ origins, Seiryu joined them as Pandemonium’s Contracted Sacred Dragon.