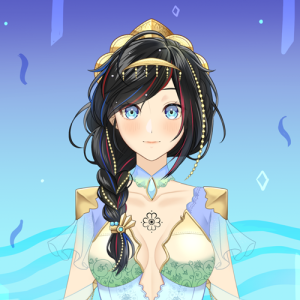 SaySay (サイサイ) is an independent female English/Filipino VTuber. She currently resides in Qatar after getting lost in a tour. She originated from Surigao del Sur in Mindanao, Philippines, hence, also known as a Bisaya VTuber. She became an official part of the Filipino Vtuber Group, Balangay Live, on November 20, 2022 as one the three members of Generation 0: Liwayway.

People believed that some of the remains of Lemuria, the lost island from the past, resides in Mindanao, Philippines, which causes locals to have numerous beliefs, supertitions, urban legends and myths.

However, when generations change, the stories and beliefs remain as stories along with the others.

SaySay, whose real name is unknown, also called as Isay by her believers, is a modern remnant of these so called myths. As the descendant of the Great Witch, Mankukulam, the God of Fire from Kasanaan, or Underworld in Tagalog Pantheon, she was awakened through atavism.

SaySay has deep attachment with the humankind since she was born from human parents, and often used the "borrowed" (stolen) power from Kasanaan to go in different timelines and places to satisfy her curiousity.