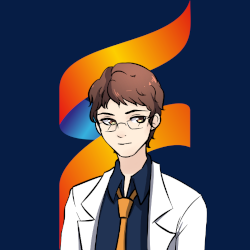 Sam is an SFW/Clean/Family Friendly vtuber who started streaming on Twitch, primarily focused around playing multiplayer co-op PvE and team-based PvP games with his community, out of a desire to have a welcoming social environment with people of similar values and interests. He also uploads occasional gaming variety and discussion videos on his YouTube channel as well as hosts the 'CounterPick - New Perspectives' podcast.

His personality is often described as friendly, caring, attentive, easy to talk to, knowledgeable, and well-spoken. However, he also has a very firm will and is determined to be genuinely himself, regardless of whether asserting his personality or opinions can be a bit polarizing at times.