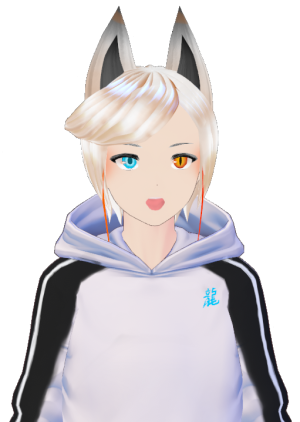 Ryhn (Ry) is a Dragon-fox college student who's lived a couple of lives and decided to be a Streamer in this one. He plays whatever games that are in his game library (not that he's very good at them). Since he's a student, he plans to do frequent "study streams" where people can study along with him to calm music.

A young man who has lived a few lives, each time having his time cut short by something likely avoidable. With each death, he develops an irrational fear of the thing that game-ended him. Maybe it's his survival instinct? In his most recent iteration, he met his end when he challenged an abnormally large spider to trial by combat, This young man was born again with nothing more than a fear of multi-legged entities with a leg count of more than 4. And for some reason he's now a dragon-fox? However this world is a very ordinary place with its own problems. Combat skills? Gone. Artistic Talent? None. Intelligence? Debatable. In order to regain some of his combat ability from his previous life, he joined Kendo, AAAAANNNNNNND..... that's it, he really hasn't done much else.

That's why he is currently in post-secondary with barely any direction of where to go. During one of his time-wasting binges, he clicked on a video containing a certain white fox, jumping across platforms? Something sparked inside him and he started binging videos with anime girls playing video games. One could even say, he fell down a "rabbit hole". After a while, he decided, that this was something he wanted to be a part of, not just emotionally but physically. He spent the next year thinking and planning. One day he decided that enough was enough, he set a deadline aaaaaannnnnd... JEEZUS THERE'S LIKE A WEEK LEFT! The young man spent the next 8 days (with some sleep of course) rushing to create (albeit scuffly) what he needed to start his journey, he can just replace them later right? This was his chance to start building back and even surpassing what he was in his previous life. Also, he just really wanted to get through his game library (which is ever growing) so he can justify the amount of money he spends on video games.

And so the faithful day came, "Here we go, from Zero!"