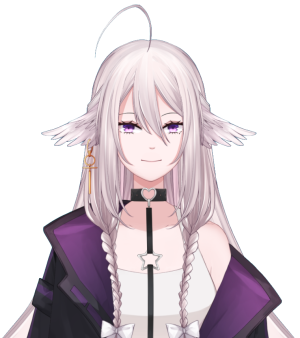 Ruru is a comfy angel vtuber who is also a papa’s girl, she loves her father dearly. She streams a variety of games but mainly streams ffxiv.

Ruru is half angel and half human. She was raised in the human world by her father who is an angel. She never really knew why they had to live amongst humans or where her mother was.

When she reached adulthood, her father had to leave telling her he had a duty he needed to fulfill in the celestial world. Ruru asked her father if she could go with him but he told her she couldn’t and she should stay in the human world. She was sad to see her father go, she didn't know how long he would be gone for, or if her father would even return. He assured her that he would be back, and told her he will be watching over her and gave her a gold earring that she could hold onto while he's gone. Choosing to have faith in her father she gathered up her courage and looked up at him giving him a smile "Ok Papa I'll be here when you get back."

While looking forward to the day her father returns. She decided to live life to the fullest and cherish every moment she spends with her precious friends. Thus, she has taken on vtubing where she can connect with many people and make lots of new friends.