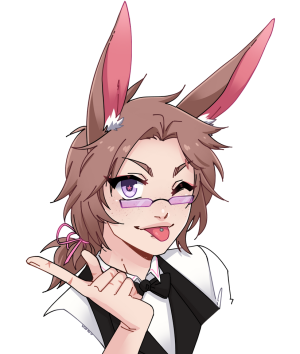 • Runs a night time café called the Cup of Dusk

Growing up most of his life feeling like an outcast, Roy spent a large portion of his life always trying to fit in. While it seemed to work for a while, there was always that empty feeling inside like he just didn't belong or that people just barely tolerated him.

After a near mental breakdown and identity crisis, Roy decided it was time for some serious soul searching and self discovery. Thus, he opened a little café at the top of a non-descript city overlooking a beautiful sunset.

The Cup of Dusk was born, and Roy decided he would do anything and everything to make it a place he felt at home. Though, such locations and businesses don't come cheap. There's a number of contracts, backdoor deals, and shady partnerships he's entered into. Whether it be demons, yakuza, gang bosses, he'll do whatever it takes to make his business a success.

As such, the Cup of Dusk is a welcome home to those looking for a chance to explore their own identity. It's not a safe place, but it is a place where everyone can freely discuss their interests, lifestyles, sexuality, gender identity and more.

Oddly enough, this has attracted more than a handful of powerful beings. From gods to hellhounds, delinquents to demons -- There's no telling who could show up next. Hell, the café even found a sponsor in a long lived dinosaur who makes sure the the building and the bunny are always fully repaired and recovered before the doors open next.

Now Roy lives each day to the fullest, sharing his new journey of self-discovery and life stories with as many customers as he can. There might even be a spot of wisdom or two hidden behind all the bad flirting and coffee!