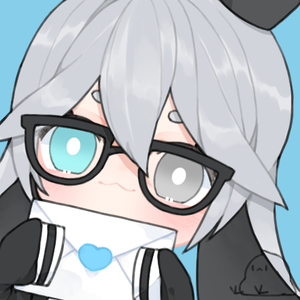 RoyalGeekz is a Virtual Streamer who makes content in English.

She is a small Asian bunny with a weird and cute personality. RoyalGeekz started streaming around April 26, 2020. Known as the "Top Rice Dealer" throughout the streaming community, She's always providing the best type of rice to every customer she meets. She's also known by her two OCs, Zero the battlemage half-elf & Royal the bunny goddess.

Zero - Zero is a Steampunk elf who was reincarnated back to life & carry a deep curse from her past life as a holy healer for the royal empire. In her past life, she was praised as the holy healer of the empire at the age of 10 with her talented magic. Later on was killed & betrayed by the ones she loved & trusted the most. Her death almost corrupted her own soul. Luckily Royal helped resurrect Zero while splitting her magical soul in two, dark & light. Her soul splitting also cause her to have two eye colors. Each representing the two souls. Zero, now reincarnated, live as a battle mage to obtained answers to why she was targeted by her comrades in the past & to combine her soul as one again. (farmer by day, battle mage by night)

Royal - Royal is a small moon & water bunny goddess. She was born from a shooting star & was raised to take her mother place as the moon goddess. Not much is known about royal & her mysterious childhood.

Royal met Zero during the empire coronation of the new king. Royal saved Zero from falling into complete darkness after her death. Making a deal with Zero in aid of her resurrection. She sacrificed some of her power to zero, which leads to her changing form from an adult to a child. She has short white hair while having white & sky blue eyes.