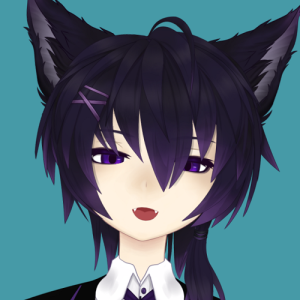 Rorie Artemis is a wolfboy of unknown origin and is learning about his identity. He is a variety streamer and loves to entertain people. He struggles with his own identity and likes to have a mysterious aura to draw people in.

He is the manager of the Lunar Den where people can hang out and have fun. Despite having no prior experience in management, he tries to make an actual name out of it and wants to succeed.

Rorie is a growing individual and cares a lot about being a better person. He wants to set a positive example for the community and show that it is possible to become a better person.

He comes from a family that has kicked him out and left him to roam the streets without any shelter. He was taken in one day by a special someone who provided him a butler cosplay outfit since that was the only clothing they had for a male. Ever since then Rorie has developed an attachment to the style.

Eventually, he wanted to do something with his life and wanted to put himself out there. One of the things he really wanted to do was have an audience and manage a community thus streaming was a good opportunity for him.