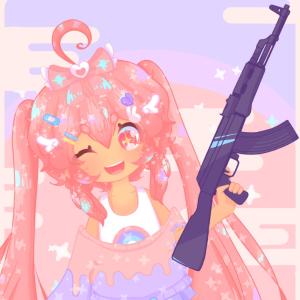 Rika Hana (リカ・ハナ) is a Malaysian JP Loli VTuber, rapper, producer and artist. Her content is mostly a mix of violent gang-related themes combined with elements present in Yume Kawaii and Yami Kawaii. She specializes in Trap Rap and Hip Hop music, mostly containing elements of Yume Kawaii and Gangsterism in its lyrics.

She looks drastically younger than her actual age due to a condition since birth but is completely healthy. She suffers from some mental conditions which is a big factor of her behaviour. She is bisexual but mostly preferring men. She is often extremely vulgar and foulmouthed but when needed, can be family friendly.

Her weapon of choice is either an axe, an AK-47 or a Glock 17 depending on the type of combat she will engage in. She rarely ever plans out her attacks and acts on impulse, which can be seen as very reckless but somehow works in her favour. However she does not enjoy starting fights and only engages in retaliation. She would rather, in her words, sit at home and fucking cook my bacon to anime men or something, to pass the time.

Very important motifs of her design include bandaids, angel wings with a swirl at the beginning, four-pointed stars, guns, strawberries, drips (as if something is melting), a pastel color palette which almost always contains pink, blue and purple and the number 15 (pronounced 一五(Ichi Go) which is a play on words of the word イチゴ (lit. Strawberry)). Her hair is almost always tied in at least some variation of the twintails hairstyle and if not, is simply let free. She often wears clothing which is larger than her body size as she tends to buy clothing more suited for her age rather than her body type but occasionally wears more form fitting clothes.

She was born into an abusive and manipulative family in a gang infested area of Malaysia. With the help of a friend, she ran away to Osaka to live a better life only to be abandoned by her and left to die. She fended for herself in the slums, running from gangsters. She ended up resorting to living in a large dumpster behind and alleyway of an abandoned building that nobody uses and i waiting for what fate will bring her.