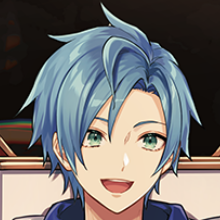 Regis Altare is a male English Virtual YouTuber endorsed by hololive's branch HOLOSTARS English. He is a member of "TEMPUS" alongside Magni Dezmond, Axel Syrios and Noir Vesper. On 24 July, after the debut of all TEMPUS members, a video was posted on the HOLOSTARS English main channel announcing the first original song for them, making them the first hololive Production branch and unit to receive an original song after their debut. On the same day, he reached 100.000 subscribers making him the first HOLOSTARS English member to achieve this milestone and the fastest growing HOLOSTARS member in general.

He likes trying new things, singing, gaming and milk. His hobbies include, playing the cello, nature documentaries and Pokémon cards. His favorite games are: The Legend of Zelda, Alien Insolation, APEX Legends, Minecraft, Pump It Up, League of Legends, etc. His favorite anime are: Sword Art Online, Horimiya, Barakamon, Made In Abyss, One Piece, Haikyu!!, Anohana and Tegami Bachi. His goals are, getting good at games, starting a podcast, release an original song, getting better at Japanese and Korean, play every Zelda game and make people smile. He dislikes sleeping early, slimey and creepy crawlies, puzzles and milk (due to his lactose intolerancy).

The founder of Adventurer’s Guild TEMPUS. The first-ever adventurer to set foot in Elysium, he dislikes stagnation and the status quo. He is childish at heart and generally bungles everything he touches, and yet he is inexplicably popular among his peers. His earnest straightforwardness may well lead to him being called a “hero” one day. “The masses chose not to act. So I’ll take a stand in their stead.”