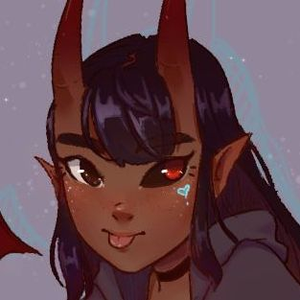 Rainhet is a Virtual Streamer and YouTuber from England UK. She is a 3D modeller and general artist that makes a lot of variety content on both her YouTube channels 'Rainhet' and 'Rainhet Channeru'

She streams mostly gaming content and 3D modelling (Blender 2.9) weekly on Twitch. Originally she streamed making digital artworks and emotes but those streams died down when she started getting more 3D commissions.

Her biggest growth as a creator has been due to an old Yandere Simulator Commentary, Vrchat Voice Trolling and an artwork of Corpse husband and Sykkuno that she has expressed having mixed emotions on.

In the darkest depths of Hell a young demon girl sat alone in her room, She was the daughter of Satan and a friend of all of the underworld residents... at least, she would have had friends had she not spent her entire childhood with crippling introversion.

Concerned, Satan called her to the eternal flames to offer his assistance. They talked and talked till finally the words fell out of her mouth “I wish I could start over,”

Satan’s eyes glowed a deep fried, devilish red, his brain buzzed and his heart rattled against his ribcage. He knew what he could do for his demonic daughter and he told her about a place called Earth and a baby called Jesus.

The demon girl squinted her eyes and scrunched her nose. “I thought this was about me having no friends,” her confused voice questioned.

“Oh, right, you can make friends too I guess,” he said as he grinned his razor teeth and placed a hand on the small demon’s head. “of course,”

It only took a few days to prepare for the demon’s exorcism from Hell. The perfect pentagram was carved into the floor of the tallest tower in Satan’s castle. Red flames danced in the cracks of the stone bricks and spelled out words in a language with claw-like letters.

The demon girl stepped into the magic fire ring and with the wave of his arm, Satan sent her away.

One day on Earth a lady was cleaning her room when an imp suddenly appeared before her. she swore at the strange thing and bat it away with her broom. The imp tried to tell her that Satan has taken a liking to her and has blessed her with a baby girl but she was having none of it.

The imp flew away and the lady forgot about the strange creature, but what the imp had said that day was very much true..

Months passed and the lady gave birth to a baby girl who she named Rainhet. At the time the baby was rather human looking but something was definitely off about her. Something very sinister. But people got used to her weird red eye, they ignored her horns and paid no attention to her arrow shaped tail.. at least, people would have done that had she not spent her life growing up on Earth with crippling introversion.