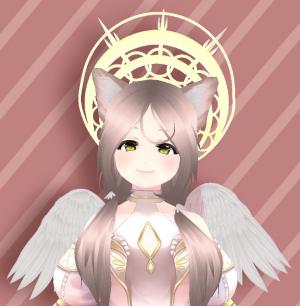 Raen is a Seraph, though she may not look it because she has to take on a form that may be more appealing while she's present in the human realm.

But so far during her time here, she learned how to record her thoughts and creations as well as communicate with humans through Twitch. Though she's still new to this whole streaming thing, she's doing my best to learn about it and better herself!

While she is streaming, the stream becomes her own sort of Angelic Realm - and every one who clicks that little button with the heart on it that says "follow" is considered part of it.

Raen is currently under the care of a human named Lynne who is teaching her things about what it's like in the human world, and trying to help her with the proper mannerisms and communication skills (though it doesn't seem she's the best at it herself.)

Raen is a Seraph given special permission to leave the heavens and learn more about the human realm.