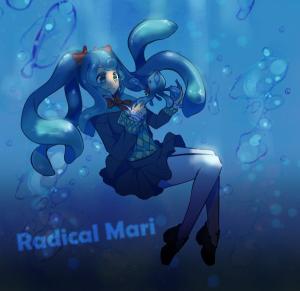 RadicalMari (she/her, also referred to as Mari) is a squid VTuber streaming part-time on Twitch. She primarily plays variety, but prefers playing Nintendo titles, games with friends, and table-top Magic: The Gathering (either pack opening or EDH games). Her stream is one that runs on "gremlin hours," all while remaining a supportive space for LGBTQ+, BIPOC, and Furry individuals from all over the world.

Once long ago, in a far distant sea...

Sailors on the open waters would pass the time by singing sea shanties; often they told stories of great feats, love, the desire to return home. One such song told the story of a Mighty Kraken who feared the damage man would cause until one day, she heard a sailor's sweet song and fell in love. She made the decision to turn human so she could live on land with him. And so began a life filled with love - one where the man had a muse, and the recently-turned-human could cast aside her detestation for humans.

The sea shanty in question was lost to time until very recently, where it gained popularity on a video-focused social network. As is outlined by the Tinkerbell effect, because enough people knew of its existence, the sea shanty was manifest into a being - the VTuber known as Mari. Because the song was most popular with Japanese students, her form was interpreted to fit their perception - a humanoid with squid-like hair and the ability to occasionally turn into a completely squid form (which, sadly, is merely six inches tall)

One thing Mari is actively avoiding through it all is the fate outlined in the sea shanty, which is finding and falling in love with The Sailor. Though there is someone in her life that may fit the bill, she refuses to refer to him by anything other than "her secretary;" funnily enough, she's often seen making sacrifices and decisions to stay close to him, going so far as to follow him when he moved away from the Pacific all the way to the continental United States.