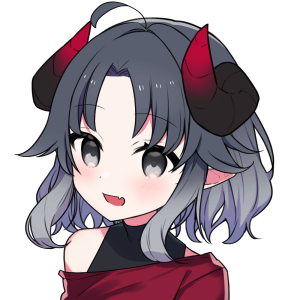 Rachael is a VTuber from the UK who now lives in the USA. She is a Overlord, who runs her own realm - sort of.

Overlord Rachael has a fairly open and readable history, compared to that of other Overlords. Her Netherworld was previously governed by Overlord Xavi, her twin brother - whom of which she murdered to claim the Overlordship of the Netherworld. Her ascent to power was a quick one. Overlord Rachael did not achieve her power by standard means - she was, as previously mentioned, incredibly gifted in the art of Blood Magiks. This allowed her to thrive in her brother’s government, achieving momentous success in tournaments, and quickly earning the title of Lord Master of Blood Magick.

Despite her successes, she hungered for more. She was tired of being an educator, knowing she was far superior to her brother in terms of strength and technique. She also knew, however, the only way to obtain that power - was to rid of her brother 𝖋𝖔𝖗 𝖌𝖔𝖔𝖉. Once she had decided that her next move would be to remove him, she went about finding her chance. Her and her brother had never been close, she was always hiding in his shadow for no good reason. She had worked hard her whole life, and was always ignored. Always. 𝓢𝖊𝖈𝖔𝖓𝖉.

She remembers the day vividly, she recounts it often. She often refers to it as the best day of her life. The Scarlett Netherworld has long nights, lasting around 15 hours. It is dusk for the majority of the day. She waited for her brother to be done with his duties for the eve, then approached him. Rachael was still a demon of formality, she respected the way her Netherworld had been governed thus far. Just because she disliked her brother - does not mean she cannot respect the efforts he had put into turning her home into a well oiled machine. Proposing a duel, she requested only one witness to be present. She was not after washes of fame, she knew it would be a quick battle - she just needed it officiated. The battle would begin after the rest of the Netherworld was resting (Demons need sleep too, contrary to popular belief.). She wasted no time. She wanted this over. Rachael did not hesitate, she used her favourite Blood Magik immediately - draining her brother's blood from his body from any oraphis she could. It starts slow, almost unnoticeable. A small nose bleed. A drip from his ear. He could continue fighting without even knowing he was slowly bleeding to death. She knew, while the aerial fighting continued, eventually he would fall from grace. 𝓐𝖓𝖉 𝓗𝖊 𝕯𝖎𝖉.

The shock on her victims' faces was the best part. You would think her brother would know not to be too complacent, but he always was. He just wanted to defend his title, he had forgotten in that moment that the battle was lost from the second he agreed to allow it to be contested. He fell. Fast, and hard. Blood poured from his mouth, eyes, ears. He coughed and spluttered, Rachael’s eyes staring down on him. Her fanged smile, coated in blood.

She had done it, to others she was malicious, to herself - she was freed. Now, she could rest. The following morning, she claimed the throne of The Scarlett Netherworld for herself. The red rivers she had come to love, all hers now. It was all…finally hers.

Many years have passed since that day. Overlord Rachael is still powerful as ever, and sometimes even has to defend her title. Though, she is nearly always astronomically exhausted. When she seized the throne for herself, she was aware of all the tasks she would undertake. As years passed and technological advancements occurred in her Netherworld, she slowly began enjoying pastimes and neglecting a few of her responsibilities. It had been hundreds of years. She had hundreds of Vassals now to do her bidding, and her Netherworld would function without her for a few hours a day at least. She’d worked hard adapting her brother's systems to allow herself some free time. Despite this, she still has hundreds of years of sleep deprivation to make up for - leading her to be in a perpetually tired state. This is not to say she is..lazy. You daren’t call her lazy or risk meeting the same fate as her brother. (She uses that threat a lot. Everyone knows she’s fully capable of doing so too.) She just spends her time doing things she enjoys, after all, she knows there’s nobody that can take her throne just yet. She has changed much as a leader over the years, despite her power she has softened and become a more approachable version of herself. She reignit her love for education after marrying her husband, who also introduced her to one of her favourite time wasters - video gaming. She found a way to stream her progress to other Netherworlds, too! She loves meeting people from all walks of life, but you daren’t cross her for fear of losing yours. Rachael is now quite fun to be around, after losing some of the anger and anxieties within herself - she is definitely one of the more light-hearted demons. Though her blood still runs cold - she has learned to be friendly. She hopes you enjoy your time spent with her, after all, making friends as a demon is not the easiest task.