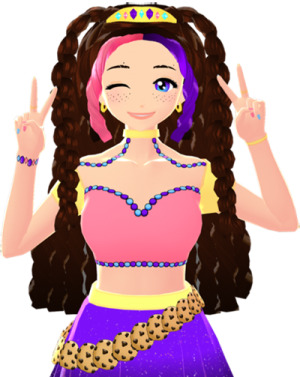 Kan is a female virtual content creator who speaks English and studies Japanese. She is a writer as well as a self-taught musician who plays piano and ukulele. Her typical content includes livestreams on Twitch of video games like Minecraft, Cooking Simulator, Phasmophobia, and The Sims 4, in addition to music covers of her favorite songs. She's often categorized as a comfy creator for her soft voice and trademark sweetness! Kan also fundraises for charity with event streams, taking part in initiatives like ExtraLife and Thankmas. She herself has a rare form of tinnitus called Middle Ear Myoclonus and is transparent about her experiences with chronic illnesses.

Far from your world, yet somehow just a leap away, resides the Kandy Kingdom. This parallel dimension, enshrouded in pink clouds and vanilla scented sunsets, is bound by the same natural forces as your reality, plus one: sweetness. Such is the main element of all citizens there, known as sweethearts, especially in the case of their ruler, Princess Kanmuri Takase.

The former king and queen of the Kandy Kingdom, whose names have seemingly been lost in the frosting of public history, were once said to be fair and effective leaders, yet wanderlust dreamers with short roots. Just a sprinkle over two decades ago, the royal family welcomed the birth of a daughter. The sweethearted princess was named after the crowns they wore and the kanfections they loved. As her parents continued their interdimensional escapades, Kanmuri was instead raised by kourt members, libraries, kitchen staff, and gumdrop mountains, which gave her bruises from climbing. Her love for desserts grew exponentially as she met every baker and patissier in the kingdom. Kookies, kannolis, and especially the namesake kandy... they all helped keep a smile on her face as she aged.

One fateful day, her parents left a note at the kastle explaining they were leaving for another trip, but this time they had no intentions of returning to their posts as king and queen. As many wondered what was next for the nation, Kanmuri quickly acknowledged her duty to protect all citizens under her newly inherited rule. At her coronation, she declined the title of queen, insisting that she would not act like the figureheads who came before her. She severed her name and ties to the parents she never really had. The princess, now just called Kan, vowed to strengthen, honor, and cherish her homeland, as it should have always been.

Kan now travels between dimensions to strengthen her alliances, welcoming new faces into the kingdom she loves to call home. Becoming a star runner was no easy feat; she still can't quite figure out how to jump through space and time without winding up stuck in a tree. But the princess is motivated by the thought of trying kanfections throughout the galaxy... and because making friends is fun!

Streaming has become her preferred method of interacting with others, so she can meet new humans whether she’s at home in the Kandy Kingdom or traveling abroad. Her alliances span dimensions, and her friendships are for life, so just what does the universe have in store for the sweetheart princess next?