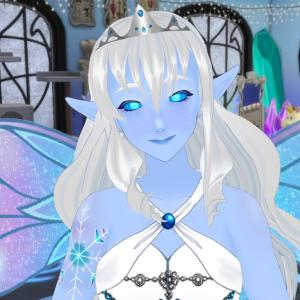 Prince Frost is a Nonbinary fairy prince of Winter. They specialize in ice magic.

They are a variety streamer from Newfoundland, Canada, and they mostly focus on art related content with a dash of games and chatting. When drawing on stream, they enjoy dispensing artist wisdom and talking the audience through the details of what they're doing and why. They occasionally stream on Picarto, dedicated solely to artwork of an adult nature.

They sometimes talk about subjects pertaining to their real-life Indigenous identity; LGBT matters; chronic illnesses and disabilities, and general positivity!

Their model was made from scratch solely by them, and they occasionally enjoy streaming the vroid process as well.

Prince Frost is over 10,000 years old by earth standards, which is pretty young for a fairy royal. They grew up in a frozen fairy kingdom named Wintermoon under the watchful eye of the benevolent Queen Aurora. However, as time went on and the Earth began to heat up, so too did that send ripples through the Fairy kingdoms that existed on a parallel plane to Earth.

Deciding to see what the humans were up to, Frost crossed the veil to Earth and was utterly shocked by what they saw. When it comes to the world, they try to keep an open mind and take things as they come, but the horrific discovery of rampant greed and chaos threw them askew.

So they decided to take up this "streaming" thing as a way of spreading positivity and "chill" vibes all around, as well as promoting an appreciation of the arts! Just don't be fooled: they're still a fairy.

And you know what they say about fairies: No matter how benevolent, they're always capricious.

Never tell them your real name. Never accept gifts of food from a fae. Never stand in a circle of mushrooms.

Follow those rules, and you'll be perfectly safe in their presence!