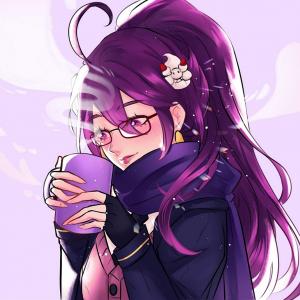 Phyllo Choux, also known as Phyllo P. Choux, is a male trap VTuber. He is usually seen live wearing his purple hooded jacket, purple skirt with gold lining, and magenta scarf. He plays a variety of games from FPS to RTS to Rhythm, name it, he's played it! He may look innocent at first but, just like his bottom-left twitter, there's a surprise right behind the facade. He usually hangs by his Patisserie co-owned by his wife, Cosmo, and doesn't mind a Pokemon Battle from his patrons.

A well-known Trap from the Galar region that decided to retire from his Fairy Pokemon Trainer career to pursue his love for coffee, baking, and entertaining people!