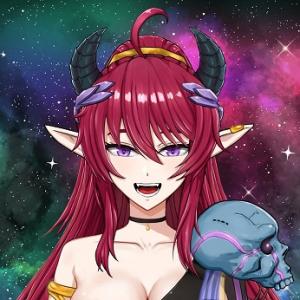 Persephone is a VTuber who creates streamed video game content on Twitch. She is married to Miss Lotl both as a VTuber and in real life outside of VTubing. Together with Lotl, she has a baby daughter and they also have a cat named Saber.

Persephone is the former Queen of the Planet Chthon, known as the "Underworld." She once ruled alongside King Chthon over the Underworld, where those who pass from life within the Kronos Galaxy go to rest.

Persephone was once known as the Olympian Goddess of Spring, Harvest, and Nature and the daughter of the King of the Planet Olympia. At a young age, King Olympia gave her hand in marriage to King Chthon; Persephone would be Queen Chthon. It was in no way a marriage of love or trickery but of station, necessity, balance, and peace. Simply a means to unite the Planets of Chthon and Olympia. And a means to bring a bit of nature and life to the unlife found on Chthon.

Without question, she ruled alongside King Chthon as Queen and Grand Admiral of the Underworld Armies. The King would stay on the planet to guard the lost souls and send them to whatever afterlife awaited them on this magical rock stuck in flux between life and death. Meanwhile, she would travel across galaxies and protect Chthon, and the greater galaxy of Kronos, from invaders and conquer worlds in the name of the Underworld.

Eventually, as time grew on and many aeons passed, she grew tired of being simply another pawn in an expansion of power across the universe by King Chthon. Not to mention, she had been nothing more than a token of power that her father could just toss away to another. Thus, after years of planning and plotting, under the cover of night, she steals away and escapes Tartarus Palace, and commandeers a Cerberus-class starship and takes off to another galaxy far away.

At some point during her travels, she formed a space pirate crew called the Black Rose Mercenaries. Sometime later, she came in contact with the Intergalactic Federation Space Force (IFSF) and her crew began to work as contracted mercenaries for the Federation. The Black Rose Mercenaries were given free rein to do as they please so long as they aren't a threat or a problem to the Federation. She worked her way through the ranks until she attained the position of Admiral within their ranks.

Upon landing on an unfamiliar Planet, she came face to face with a warrior girl known as Lotl and befriended her and soon the two fell in love with each other. The two girls eventually underwent a ritual wherein a tiny sliver of each of their souls were extracted and placed within each other, forging an unbreakable bond between the two, manifesting as matching hearts that glow within both of their eyes.

Now the two travel the universe, going on adventures and helping those in need and doing the occasional mercenary work here and there as they try to uncover the mysterious and unknown past of Lotl.