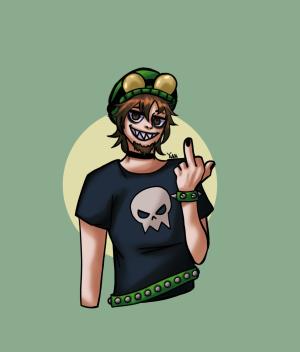 Parker is a gay, male, English Vtuber who streams games he likes for fun. He absolutely loves Newgrounds and Newgrounds culture, he's a goth/emo stoner who acts openly phalic both on and off stream for fun. He also shitposts a lot on discord and twitter, making his own memes and videos to screw with his friends and fans. He's also attempting to break it into freelance video editing work, trying to edit other people's videos for profit. He also voice acts on the side

Parker on his own is nothing special, a father of a happy daughter who streams and also makes music with his bandmates. However the multiverse is cracking, showing multiple Parkers from all sorts of different universes, each with their own quirks and differences. All being controlled by an unknown shadowy figure.