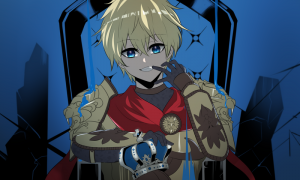 Although he may look young, Pablo is in fact over 2000 years old.

Turned immortal while he was still in his teens by his Ara-ara lover who was a practitioner in witch craft.

Unfortunately his lover would perish of old age as she forgot to cast the immortality spell on herself.

Stuck forever in the body of a teenager for more than 2 millennium, Pablo has faced many hardships, however throughout the years he has kept his sense of humor and quick wits.

He found himself entranced by the existence of Vtubers and decided to become one himself.

However although he may seem innocent and dumb, Pablo has a dark side.

Underneath that smile is 3 Alternate Ego's each with their own name, appearance and personality.

Because of the existence of those Alternate Persona's it is hard to grasp Pablo's true nature.

As of late, Pablo has started to proclaim himself the "True" Emperor of Rome...

Not much known as to why he refers to himself as such at the time...