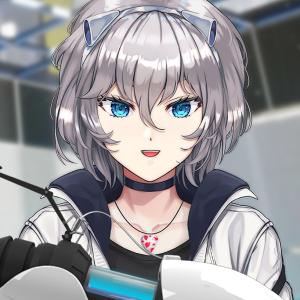 Orion (オリオン) is an English speaking virtual streamer and musician. Due to her timid nature she is usually soft spoken and calm but she is capable of being a cheeky gremlin as well.

She is known for playing music from Final Fantasy on the piano due to being a massive fan of Nobuo Uematsu and collected almost every piano book they have released over the years. Orion once contemplated on giving up the piano (and music altogether) but during that time she found inspiration to continue playing through Uematsu's compositions. Occasionally she also covers rock-heavy metal songs on the drums.

Orion is an artificial humanoid currently living on an exoplanet among human settlers in the After Earth Era (approximately AD 2800+). Little is known of her origins and motives, however she later discovered a way to interact with the human civilization of AD 2022 by transmitting data through time and has become fixated with this world ever since.