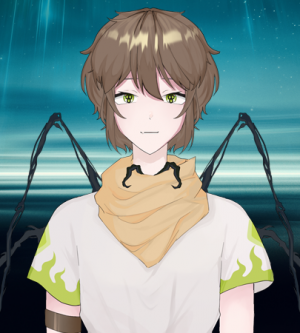 OnyxFao is a male, English only speaking VTuber from the US. Onyx streams mostly casual video games and sometimes VR content. Onyx tends to have a foul mouth but has been described as friendly by his peers. He aims for a friendly, comfy, and all welcoming community in his channel.

OnyxFao was a Vinegaroon (Whip Scorpion) that was summoned by a royal family in a different world with the hopes of him being their ultimate champion. When summoned he assumed an almost human form and was forced to fight in the Royal Family's militia. Some time later while serving the royal family Onyx was set free by his only friend, the royal's son Ansel Bright. Given his freedom he was allowed to travel using his power gifted to him by his summoning to this world. Free from his servitude he decided to always find those in need of his help, to repay the compassion shown to him by his old friend Ansel.