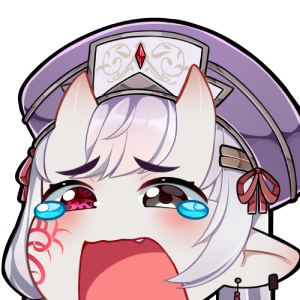 OniNya is a soft spoken but misunderstood kuutsundere x danredere that can't control her awkward tendency to be extremely blunt. They're a Virtual and irl cosplayer of many forms. She streams in English, Portuguese and is learning other languages. She is too lazy most of the time to be pro at games but still tends to tryhard and rage, (at auto battlers). Birthday is March 14. Her zodiac sign is Pisces. Her height is around 6'7. (factual)

Dunizi is a demi-demon whose other half is human, she comes from an ancient clan that exiled her as a child for not being a pure pure-blood oni. Despite this she doesn't hold any grudges as she only longs for someone to talk to. It was considered her sole destiny to guard a 4th Dimensional Gate that both clans were forbidden to enter.

After mindlessly wandering her deserted desert homeland of infinite sand dunes for eons she clumsily stumbled upon the sands of Time Gate. In search of a compatible host body the Sand cat guardian familiar of the Time Gate partially inhabited her body. It now lazily and occasionally accompanies her consciousness as a sadistic alter ego. She learned to dissociate from her inner thoughts in order to preserve her sanity.

Ever since this fateful encounter her left eye gained the ability to control the 4th dimensional space, (but she only uses it to accelerate time out of boredom and impatience). Spamming this ability has caused her to spawn clones that sporadically appear in random dimensions. Unbeknownst that these clones become bounded to human closets. In her spare time she infects unconscious humans with her insomnia so that there's more conscious humans to talk to during her lonely immortal life.

She reached the great height of an 8 foot (manly) demi-giantess in her original realm. Stumbling into the time gate caused her body to become that of a 4'7 girl. She tends to be a crybaby that gets insecure about her age and height due to a youngest child inferiority complex. She's curiously fond of smaller creatures but they're scared of her hyperactive manner in approaching. She is addicted to the desserts of this current mortal dimension. She obliviously avoids eye contact since it causes painful migraines that overwhelm her senses. She can be very dense about humans. She's known as an annoyingly useless NEET amongst the unfortunate "peasant" mortals that she haunts.