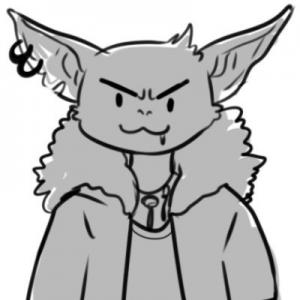 OneTrueMitch is a male Virtual YouTuber and Streamer who makes content in English. He specializes in high energy content with a focus on giving his viewers a positive and safe space to be in when life can get a little rough. Mitch likes to collaborate with other VTubers, though he is generally shy and hesitates when approaching others, causing him to do solo streams more often than not. He will play a variety of games, though he loves co-op games more than any other genre.

He prides himself on his incredibly unique level of energy that few can imitate or maintain for as long as he can. He also tends to narrate his streams, making it easy for those who are lurking to understand whats happening at all times.

He has a genuine love of goblins and wishes for nothing more than for the negative perceptions of goblins in media to come to an end, despite playing into those very stereotypes from time to time.

There is little lore surrounding the backstory of OneTrueMitch, but what is known is that he is a Goblin Lord that hails from some cave in Canada. The clothing he wears he stole from random people and places, and he has a butter knife which that he calls "The Infinity Knife" for some reason. He also has a keyring attached to his neck that houses random keys he stole from random places. What they open, only he knows.

Sometime after reaching affiliate, OneTrueMitch was gifted an upgrade to his cave in the form of a special flag with his affiliate date on it to celebrate the achievement, as well as a ladder in which to hang it.

Following that in his 100 follower mark, OneTrueMitch was further gifted a celebratory flag from the VTuber HQ that updates every 100 followers. He also stumbled upon a Pokemon Egg, and has been caring for it since.

During OneTrueMitchs first ever stream in VR, he came to learn of gravity magic through a game called Blade and Sorcery, and has been studying it ever since.

After surpassing 200 followers, OneTrueMitch got a plethora of new changes. Firstly, his follower flag was upgraded to reflect that new milestone. He also got an immense upgrade to his clothing so as to better reflect his status as the King of Goblins. His Pokemon Egg also hatched into a Vulpix!

At some point, he came across KultofMany and almost instantaneously declared war on her; a war that is raging to this day. Many and Mitch are good friends despite the war, and it seems as though there is some deeper meaning to their fight. So far no real victor has been declared.