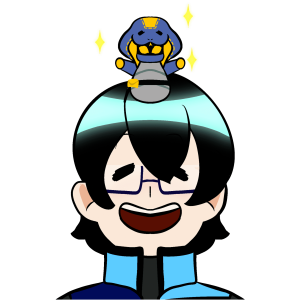 Okaro is a English Virtual Streamer. They love to play video games, and talk about food. They play a mixed bag of games, and are a big fan of almost anything Zelda. They are 6 foot 1 in hieght and features a blue, cyan, and black color scheme. They try to spread wholesome messages, albeit they sometimes do it in an aggressive way.

I lived on a planet called valtania, and on this planet, I'm a renowned Warlock, but as one day I was practicing teleportation, and I caught a glimpse of a planet called Earth, and as I walked through I was shocked to see the technological advances this planet had accomplished, it interested me, so I took the time to learn about it and picked up the fun hobby of playing video games, but then I realized something... This planet doesn't accept my currency, so I started to look into how to make money, and decided to start this streaming stuff, and made friends with some of these earth folk and have partnered with them, and as I slowly learn more about this planet, the more I become attached to it. The one downside, I am unable to return home, as this planet lacks the sufficient energy to teleport back to valtania -