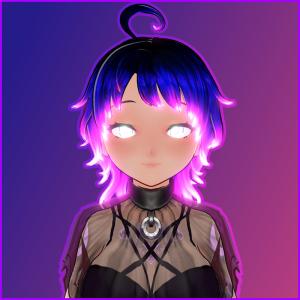 Shoyu is a non-binary English-speaking Virtual YouTuber who makes Just Chatting and gaming content. They are also known for doing multiple voices during their streams. Shoyu started their activity as a VTuber on March 28, 2022, but never had an official debut. Their first model was a Neko, but then their official model appeared on their channel on June 27, 2022. They use any pronouns. Their birthday and age are unknown. Their height is 180 cm.

Shoyu is a powerful entity, responsible for creating everything and everyone. They have the function of managing all dimensions, universes, galaxies, everything. They are omniscient, omnipresent, and omnipotent. Their powers are immeasurable.

The origin of their name is because they ate sushi on Earth and loved the taste of Soy sauce (Shoyu). Their first form was a purple-haired neko, which was later changed to a person with shiny colored hair (pink, blue, and black). Shoyu has shiny tattoos on their body, two on their arms, one on their chest, and one on their back, all of them fox-themed. Their eyes also emanate light, which makes it look like their eyes are white, but, their irises are pink, purple and green, and their pupils are pink.

One day, Shoyu was doing their usual routine of creating and erasing dimensions. They had been bored for a while. After much thought, they realized that they had unlimited power, had created everything and everyone, but they were not participating in the growth of all these beings. They then split into several parts and went to various dimensions and planets to learn more about their creations. They are in multiple dimensions, universes, different timelines at the same time at the moment. Its best known part is the part that exists in our world, which lives somewhere unknown.