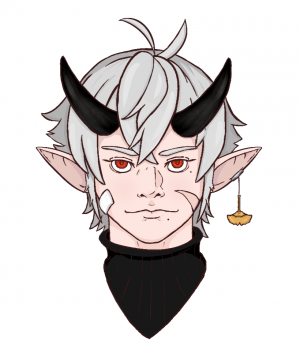 Ryūji is a male Vtuber whos does content in English. At first he did art streams but eventually started adding gameplay to his channel (which has become the main focus out of late) eventually becoming a variety streamer related to art and gaming. Rarely he also does "Let's Talk" streams with a background reminiscent of an izakaya.

In the vast ocean that is the realms beyond mortal reach, the Dragons in one of its drops of water have a long hatching period of 3000 years; during their egg phase, they spend a thousand years in the sea, a thousand years at the mountains, and another thousand between the child of Man of their world, looking like a snake at first until they age enough and have a growth spurt where they finally get their final form, a Dragon. Ryūji is one such Dragon from this world, born in the Ogawa family, a clan from a long lineage of blue dragons linked to the element of water and the domain of arts who was summoned to this world around 800 years ago. At first, he lived among the humans of this realm in his true form, however as people started believing he was either the legendary Seiryū or a dragon deity linked to the river, Ryūji decided to disappear to the mountains where he adopted a human form. Since then he has been living among humans, learning and adapting to their ways as the centuries went by.