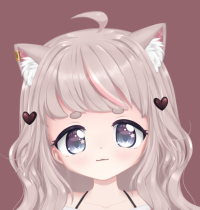 Nyvoku Fuwa is an independent VTuber that produces content in English. She is 150cm tall(including ears, hair, and ahoge.) and her birthday is the 27th of June, year unknown. She debut on the 10th of January 2021 on Youtube, but, now most of the time streams on Twitch.

Once upon a time, there was a little cat named Fuwa. She was a perfectly normal kitty... Well, almost normal...

but what Fuwa wanted to eat more than anything... was ice cream. Cold, sweet, soft and delicious...

But Fuwa wasn't allowed any. And they kept it behind a magical frozen door...

But one hot summers day, Fuwa awoke to find a bowl of ice cream completely unattended... The most delicious she had ever seen... Fuwa quickly ran to eat it, of course.

"Muhuhu?" The ice cream moved, revealing three faces. "My, my... Could it be you were trying to EAT us?" Fuwa has infact tried to eat a very powerful slime.

"So Fuwa, you desire to eat human food so much... You dared to eat me? Than maybe, you should just become one. You will understand the stresses of human life, bills, chores, jobs, relationships, how would you learn to live? Still hungry?"

Before Fuwa could respond, the magical ice cream slime used its magic on her. Within just a few seconds the small cat... became a small human.

"Should you want to turn back, you simply need to give up and eat cat food. Oh, and don't try to take the clip off your ear. If you do that... You will die."

and so... Fuwa became human. but they made one, tiny mistake.

Fuwa stared at the slime... "Still hungry-meow" She uttered. "W-wait... Why are you looking at us like that.." The slime cried.

Some moments past, nothing but a bowl remained on the table, and mysteriously, Fuwa gained the magic to create and control ice cream.

The most delicious she had ever seen.

Nyvoku Fuwa, a cat, now turned into a human. Used her newfound powers to create and sell ice cream, pioneering the industry. With her newfound freedom, income and human form, she learns to draw anime girls, make friends and play video games. Oh, and eating everything she can get her hands on!

Note: Her logo, appears to resemble the ice cream slime she presumably consumed.