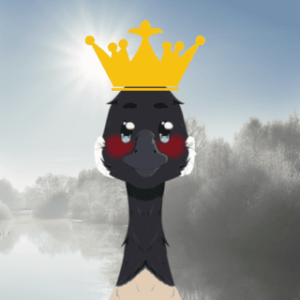 NteTheGooseKingVT is a goose vtuber! He streams a variety of games and loves engaging with his viewers.

Part 1 (Debut) Nte was just your run of the mill goose that enjoyed chaos just as much as his brothers and sisters. In his world, Geese are feared throughout the land for their chaotic tendencies. However, not all geese were the same. There were rumors that geese held secret powers and enchantments unknown to the race of humans.

He was minding his own business whilst swimming around in his pond until he spotted a wizard feeding a bunch of ducks nearby. He lets out a happy goose noise and hurriedly swims over to get some snackies from the generous wizard.

The wizard shoots a venomous glare toward the goose and swats at him with his staff. "Go on! Get away, you nasty creature!"

Nte stretches out his neck as far as it would go and snags the back of feed from the wizard and runs away, his webbed feet slapping beneath him in a fast rhythm. Before Nte can enjoy his spoils of war, the wizard zaps him with a spell.

He suddenly began to transform into a human! His feathers turned skin clad in a hoodie and pants. The wizard's lips curled into a mischievous smile as he lets out a hearty laugh. "Ha...try that one on for size, goose boy!"

Anger began to well up inside of Nte and he went to chase after him but fell on his face. Human legs are weird! The wizard took back his feed and exited through a purple portal.

From that day forward, Nte swore to raise an army of Geese and allies to enact his revenge on the wizard who cursed him!

He proclaimed himself as...THE GOOSE KING

After having been cursed for quite some time, Nate, the Goose King, has amassed quite a few allies. There are some who knew very powerful spells that could break his curse! The king was placed in a remote pond that was told to have magical properties surrounding it. How that came to be, no one knows. The sorcerers began an incantation and before he knew it his body began to transform.

His arms began to turn back into feathery wings and his height shrunk tremendously as his human legs turned into adorable goose legs. Within a blink of an eye he was back to his original form! He let out a few happy honks and turned to gaze upon the beauty of the pond. This magical pond shall be the making of his new kingdom and home to his Goose Army!