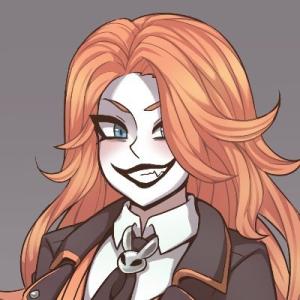 Norah (and her loyal eldritch bunny Bunbun!) is a magician vtuber who makes content in english.

She streams a variety of games, souls-likes and other such pain-inducing adventures being prominent among them. On occasion, she also enjoy taking the time to educate her audience in the french language, or talk about french history.

A normal girl born in XIXth century Paris, Norah one day stumbled by accident in a neighbouring dimension, under the control of beings of incredible power referred to as "the great ones". Here, she was given the task to entertain the beings, and recruit more people into their service. She also received a companion, who would take the form of Bunbun, her treasured bunny of darkness.

Against all sensible thinking, she accepted, and eventually founded her own circus of hellish design, the Stygia Circus. In that dimension, time passes much slowly, so when she returned to the normal world, much had changed. And if today's entertainment means presenting a show on the internet, then she will gladly partake in it!