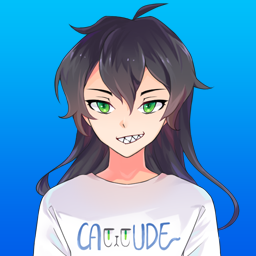 Kamui is a male Virtual Twitch Streamer, who focuses on gaming content. His native language is german, which is also the language he streams in.

He has a very chill personality and rarely gets angry. He likes to stream hard games that challenge his calmness, but is also known for collaborating multiplayer games like Minecraft with other german Vtubers/Vstreamers.

He stated he's interested in doing chatting, music, programming and asmr streams at some point, but at the time he's only done gaming related content.

Kamui claims to just be a friendly neighborhood hikikomori NEET, who started streaming because he wanted to show the world how much of a "pro gamer" he is. But he dodges every question about his unnaturally sharp teeth. Is he really human, like he claims to be? Maybe there's more to the story, that has yet to be revealed...