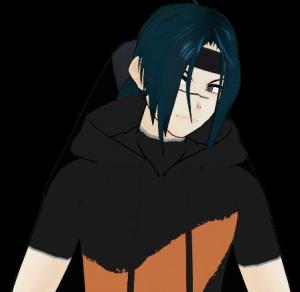 Jack is mostly gaming-based English-speaking vStreamer/vTuber who plays Metroidvania and JRPG titles. Tends to do their best work when he has someone to play off of while filming/streaming, be it chat or in collaboration. Games they love most include Shin Megami Tensei series & spinoffs, Drakengard & NieR, Breath of Fire, Castlevania, Bloodstained, Megaman series & spinoffs, and Xenogears/saga/blade media.

Also of note: Jack is in fact on the ASD-spectrum and is in bad health. Due to said health, while they try to keep a schedule, they are often late - thus extra grateful for any viewers they can maintain. Jack wishes to inspire and encourage those like them to do what makes them happy or, if necessary, to cut their own path.

Goals include starting their own group, vShonen, as a male counterpart to vShojo (accepting males as well as nonbinary people). ProjektMelody was a massive influence and inspiration to them and they hope they & she can collaborate. Currently Jack is working on a non-profit Unity-based program to give their contemporaries an alternative to VSeeFace, but with with prop import support - an alternative to what most do in Unity itself, but more streamlined & time-saving. Looking to collaborate with other vtubers as they entertain best when working off a second-party.

(Notes: Used an original sketch in what's now Animaze under previous name, then registered NoctisFurvum and started teaching himself basic VRoid modeling, Blender edits, Visual Studio, and Unity - basing the model off the original sketch. Debuted in January 2021 after 4mos preparing, with QoL updates in Feb, Apr, & Jun 2021. Current model is based on the Embryon uniforms in Shin Megami Tensei: Avatar Tuner.)

Jack lives on their original alternate Earth, where a world war broke out in 2020 leaving him one of the only survivors - and to their knowledge the only survivor. A large gash marks his nose from an old womans prosthetic-hip-shrapnel whipping them across the face after she was game-ended by N2 weapons. Using alternate universe technology, Jack broadcasts to their counterparts (in this universe) network because the A51 portal wasnt large enough to get a person through. As such, it's used purely to get new games/packages and speak to people other than himself.

It should be noted that all versions of Jack (belonging to the 'Concilium Jack') are actually quite useless even if they willingly travel (or are removed) to a new universe and as suck is not an Isekai character. Jack 512 being the most useless, only being able to breathe methane and having ectoplasm as bones.