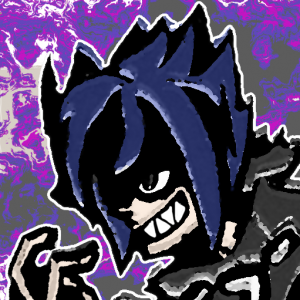 Nend makes pixel art, plays JRPGs, and sometimes has no idea what he's gonna do next.

Once a simple artist, Nend went about his daily life constantly focusing on his work and not much else. To gather inspiration for his next work, he visited a nearby dilapidated shrine. When it came to noticing those around him, he wasn't the best, so of course he wouldn't see the dark entity burrowing through the ground in front of him. The creature rose up from the ground, lashing out with indescriminate rage. Nend was flown back, his body crushed at the impact of a nearby wall. Through fading consciousness, he managed to focus on an abandoned fox mask painted pure black. A voice emerged from the mask, claiming that wearing it would grant him the ability to survive.

Nend, who would usually question such a situation, realized his life was about to end. Even if he were imagining things, he would still die anyway, so he left himself an ounce of hope to reach out towards the mask. Upon placing the mask on his face, his body transformed into a warped version of himself. Through this, his eyes gained the ability to see the "power" that others possess. When comparing himself to the creature that attacked him, he realized the mask truly did grant him a chance to survive. Without a second thought Nend struck back at the creature, tearing out the "power" that it held and consuming it into his own body. Upon inspecting the now dead creature, it did not seem to be anything recognizable; at least, not from this world.

Still to this day, Nend is unaware of the entity that resides in the mask he picked up that day. Be it a demon, or a god, he dares not ask it such a dangerous question. Even so, the influence of the mask draws itself to him. He is able to remove it, but the intoxication of the "power" within grooms his desire to keep it close by.