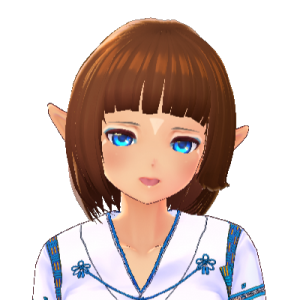 Natachi is a cis woman, biromantic asexual Polish VTuber, who speaks only English on her streams, but welcomes Polish chatters and responds to them, but not in Polish.

She thinks she is boring type of person, but still tries to entertain people despite feeling she is lacking the charisma to do so well. She is also very passionate about social justice stuff and cannot shut up about it, which probably scares people away. But if she was required to choose between big following and being true to herself, she would always pick the latter.

A spirit of luck, who can reincarnate in physical forms. Currently Natachi is an elf, but she was many things in her previous lives. She leads mundane life in human world, where she can enjoy anime, manga, video games and other stuff to the fullest. She is a lore eater, which means that she loves delving into the lore of the games she plays. She knows the most about Dragon Age though.