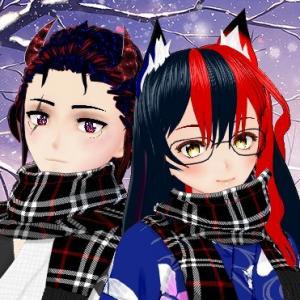 Naru_kami is associated with twitch stream team, 𝑺𝒖𝒈𝒂𝒓 𝑪𝒓𝒖𝒔𝒉, currently lead by AiCandii. He is a retired demi-god of thunder who lives with his little sister, Vera. Narukami now a proud owner of a resort lounge, aims to provide a comfy and chill environment for all guests. He plays a variety of games which includes Genshin Impact, Fairy Tail, Persona Series, Fate/GO, Left 4 Dead, Phasmophobia and Tales Series.

Before getting isekai-ed to the world of Vtubers, Narukami was a renowned warrior of the Clarent Empire, who was bestowed the title of 𝑽𝒂𝒏𝒒𝒖𝒊𝒔𝒉𝒆𝒓 for having secured countless victories over a multitude of conquests. It seems the arrival of this awe-inspiring leader motivated something inside the soldiers, something about him, the showy way he dresses, or maybe the way he fights, it inspires all of his comrades, and its all done in the name of victory for the empire.

Vera is a high-ranking noble, and maiden of roses who helps govern over the abundant and proliferous kingdom of Sandrine, a valuable ally to the Clarent Empire. She may be a noble who holds a huge and considerable amount of political power but she dislikes royal treatment. She is optimistic to the level of "sketchy", and is very poor at fighting while sticking to the manuals.