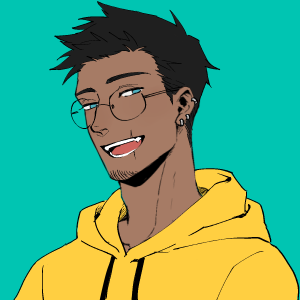 Nakamura Zenki is a male assassin Virtual Youtuber who mainly streams in English. He is very competitive in FPS games. He wants to show people how FPS games changed his world. He loves story driven games as well, such as DOOM series and Need For Speed series.

When asked about how it feels to be half human and half spirit, Zenki stays silent.

He thinks about the way his arm isn’t quite entirely his; it’s still strange to see where the stump of his flesh connects with the spectral forearm that responds to his thoughts but still feels alien. Sometimes, as he’s undressing at the end of the day, he’ll catch a glimpse of the eerie blue and, unsettled, quickly look away.

The war had left Zenki half dead. Then, a scientist found a new material-- a highly classified government secret-- and used it to rebuild him. The unstable material made him half human and half spirit, forever caught between the two worlds. Eventually, Zenki discovered that due to the mysterious substance, he has gained some new abilities: he’s able to teleport and warp.

Following his procedure, Zenki was taken off of active duty. Listlessly, he searched for something-- anything-- to help find some degree of normalcy or meaning in the empty days that stretched on in front of him. He soon found himself in the depths of the internet, where he came across something that no one would expect a hardened veteran to enjoy: VTubers.

Enchanted by the genuine nature of the streamers and the positive community, Zenki decided to try VTubing. Through it, he hopes to find a new direction for himself and to find out more about how other people think of him. When he streams, he tends to play shooting games; they remind him of his glory days when he was one of the most technologically advanced soldiers on the field. He will never forget the thrill of adrenaline that spurred his every movement and decision, and through FPS games, he feels at least a fraction of the same rush that he did before.