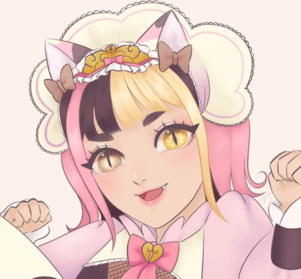 Myxie Neo is a VTuber who makes content in a variety of languages, primarily English. They are a Neapolitan Calico Cat from another galaxy, and princess of a planet all about confectionaries. Instructed to expand the Ice Cream Kingdom, Myxie is on a mission to make planet Earth a sweeter place! Through world domination, of course... but whether or not VTubing is a good place to start is open to interpretation.

Myxie’s age is equivalent to 20 human years, and does not identify with any gender as humans do on Earth. (they can be referred to with any pronouns!) They are 150cm tall in their human form.

Myxie was born in another galaxy - on a sweets planet ruled by a dynasty of Ice Cream Cats. They are the runt of their litter and aren't very good at most things, so they aren't much help in the Kingdom's goal to expand and spread sweetness to all worlds (via conquest).

Growing up in the Ice Cream Kingdom as the youngest (and not very helpful) royal, Myxie had a lot of free time on their paws. They ended up doing a lot of research on other worlds, and was interested in one known as Earth in particular. Known as the planet the Ice Cream Kingdom had trouble with conquering for quite some time now, Myxie dreamed of aiding their kingdom for conquering Earth.

Myxie eventually discovered their magical talent - bringing life onto items, and allowing living things to take on different forms! Though the extent of this talent only allowed forms limited to plushies, animals, or humanoid bodies. They find out by bringing Asa, the stuffed bunny from Earth they got as a gift, to life.

Despite the unique ability, they aren't too skilled with the power, only excelling in charisma and brute strength. However, out of all their litter, they are the only one willing to go to Earth by the time they are of age to leave the Kingdom. And so, with the mission of conquering Earth and expanding the Ice Cream Kingdom, Myxie (along with self proclaimed sister and sidekick, Asa) get sent to planet Earth.

Myxie's first encounter on Earth is with a human named Rinne. They take Myxie and Asa home with them, as they are still in cat and plushie form. Upon arrival, Myxie takes on a human form and declares they will take over Earth and spread the sweetness of the Ice Cream Kingdom. Shockingly enough, Rinne doesn't seem very phased, and they only want to make sure the world becomes a better place upon Myxie's conquest. (That, and that they get to make a name for themselves along the way...)

Ultimately, they dub Rinne as their "Earth Advisor" and Roommate, since they need a place to stay and a human to guide them. Myxie combines their "charm" and passion for Earth / pop culture with Rinne's artistic talents and background in acting / web development to start their first step towards Myxie's conquest: by starting to stream as MYXIENEO. The "NEO" portion of the name is inspired by the screen name Rinne has been trying to rebrand with, which Myxie likes enough to adopt as a surname (much to Rinne's dismay).

They start off with Myxie as a single Streamer entity and Rinne pretending to be them too, but creative differences caused them to create a distinction between themselves, their interactions, and the content they make. Although sharing their main social media accounts and audience, it has put them where they are now: your next favorite VTuber and VArtist!