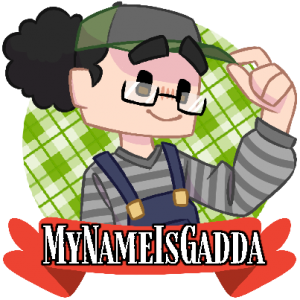 Gadda is a converted IRL streamer who primarily bakes and decorates cupcakes. He and his beautiful wife raise a flock of chickens, who supply the eggs, and a pair of ducks, who don’t supply anything. His mischievous cat, Brisket, has too many toes and is significantly more popular than Gadda himself. He attempts to stream Nintendo games on his off-day streams, and dreams of one day making the scripted minecraft video series he always wanted to as a young man. He’s also inconcievably ancient, having just turned a decrepit 29 years of age.

He is slowly, but surely working towards making his content profitable enough to afford an editor so he doesn’t have to do that stuff anymore, as he’s not good at it and it’s boring.

An important note is that, while he DOES do Vtube content on his off-days, his primary form of content is IRL Baking Streams every Saturday. This may turn off hardcore Vtube fans, having the character's "Soul" being so accessible; but as Baking content is not easy to do in a Vtube environment, this loss of immersion is understandably unavoidable.

A genial old farmer who dreams of building his own homestead out in the minecraft wilds. He’s incredibly fond of cute livestock, terrified of an assortment of “varmints”, and desperately hates fishing mechanics in every game ever. He repeatedly starts new business ventures under the same name of “Eggshell Acres,” and may or may not just be Some Guy with regrettable access to a microphone.