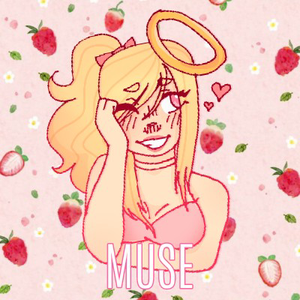 From a dark world with no inspiration, Muse Estella sprung into being in a dazzling light. And for a split moment that felt like an eternity- everyone could see pure beauty. Muse is a nonbinary American VStreamer on Twitch who mainly streams art. His character design is that of an angel, and they self-describe as "a pink bimbo full of love". He loves dogs, and her favorite VTuber is Mori Calliope.

Sent from heaven to inspire humanity, Muse is the angel of creativity. As an angel, they don't understand the human concept of gender. Muse classifies herself in the Christian angelic hierarchy as a Virtue, an angel with power over an element. They consider creativity their element. Despite this, he does not consider himself Christian and their origin as an angel is unclear.

"In a lightless world, where art and dedication were nowhere to be found, a sparkle of light and inspiration came to existence. Everyone's eyes opened up, and for what felt like an eternity, actually saw something they could appreciate.

A being, a manifestation of talent, hard work and majesty, made its presence known. Their life came to be in such a wonderful way, filling everyone's hearts with both hope and inspiration. Out from them flowed masterpieces, beautiful forms of art that would inspire and be loved by everyone.

This person came to be known as Muse, for that's what they inspired on everyone, and Muse loved dogs, a lot." -Ashorus Leviathan