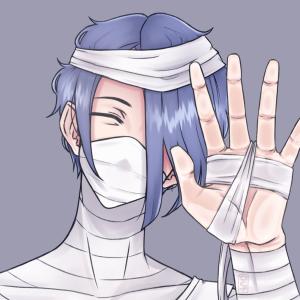 MummyMortem is a Mummy Vtuber and a Vtuber Supporter on Twitter.

He streams on Twitch but is most known for mass retweeting Vtubers who tag him on Twitter. Mortem also offers advice on growth as well as positive and encouraging content in his tweets.

He has a deep, soothing voice and provides a welcoming and comforting environment during his streams. His gaming content mostly focuses on MMORPGs but also includes games like League of Legends, Teamfight Tactics, Minecraft and also variety.

Mortem is a member of the Vtuber Supporter group 'V-Care'.

Mortem's community is called the 'Mummunity' and he calls his followers 'Bandages'.

Mortem is bound to his bandages. Mortem is able to control his bandages, changing their shape, strength or resistances. Mortem's weakness is that he has to head pat anything that seems cute to him.