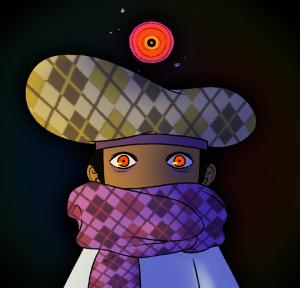 It is he! Mister HG! Your very own Virtual Virtual Youtuber, coming to you live from ████████, ██! What is up with the rock on his head? Don't worry about it! Just a normal stone! DO NOT THINK ABOUT IT. And most importantly: Have F U N! :}

Several years prior, Hardgrind (as his real self) met with a strange humanoid dinosaur (Pyro Lily) while studying in Japan. The two became fast friends, owing largely to Lily's revealing that they had met prior in the late Cretaceous. Not wishing to leave a potential time paradox be, HG set himself to the task of creating a time-machine after returning to the United States. Upon a shockingly quick success thanks to resource backings from ██████████, the young man flung himself into the past in search of his friend. The trip backwards succeeded flawlessly.

Emboldened by the good luck, Hardgrind wandered the native lands of the pyroraptor, ultimately giving up on finding a specific one of thousands of dinosaurs and settling on one at random - luckily the correct guess (or perhaps the guess itself made it so). The task was then simple: feed it until it was friendly. The full mission fulfilled, HG readied himself for the return trip to the present... But something went horribly wrong.

Perhaps the first trip was a fluke. Perhaps something broke due to the external forces in play or a slight error in construction. Perhaps someone at ██████████ staged the whole tWhatever the case may have been, the single fact remains; The machine's protective hull failed. The churning energy of the flow of time itself seeped in. Hardgrind's body was enveloped whole. A few seconds longer, and he would have ceased to be entirely. He crawled out of the crumbling machinery, body charred and still burning.

Then, a sound from above. Drawing closer. Closer. Footsteps marching decisively towards his basement lab. The rest was a blur.

HG is extremely defensive about his identity, despite his habit of prattling on about many of the rather specific experiences in his life. It seems as though he is in hiding from some unnamed organization, making frequent remarks to goad them to make themselves known. He has alluded to being some sort of professor - likely in some form of physics or engineering - but refuses to elaborate further. Hardgrind is also very open about the identity being a facade - one employed to further dissuade his pursuers.