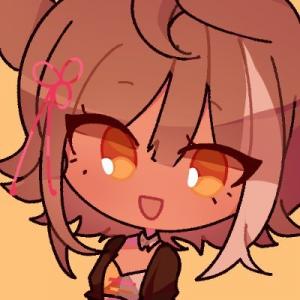 Monsday is a kangaroo Vtuber who streams in English. She focuses on positive energy and creating a comfy community, regularly streaming art and games. She is a very interactive streamer and her content revolves around having conversations with chat and telling interesting anecdotes and stories.

She is known to have incredible luck and is blessed by RNG, which mostly compensates for her bad video games skills. She likes to try out games for the first time on stream, and has stated her favorite genre is simulation which she cannot play much because of motion sickness.

She is a graphic designer, illustrator, and video editor working as a freelancer but often jokes about being a NEET.

Beaver: Monsday's Minecraft skin, which she insists is a kangaroo, looks like a beaver. She has also been compared to a deer and a rabbit.

Balding - Mons first model which debuted on June 8th 2020 started the joke that she was malding. This was expanded upon during her 2021 Charity stream which featured a bald version of her recent model as a donation goal reward. This joke has been immortalized through the balding follower emote.

Spoon Cult - On her 2021 re-debut week, Mons collaborated with her friend NegNasu on a creepypasta stream. She read the story 'Symmetry' out which quickly created a cult within her community. Chat regularly spams spoon emotes when she steps out quickly for water, and the cult has even been given their own emote.

Fire Affinity- Mons has regularly hinted at the fact that she has accidentally started five fires in her lifetime, and has told these stories every once in a while on stream. This number was changed to six on her 2022 Birthday cooking stream where she started a kitchen fire live.

Once upon a time, Mons was a normal Kangaroo living in the outback. However, due to an unfortunate possum magic and ‘freak’ cake incident, she became semi-human at the age of 5.

No longer fitting in with the other kangaroos and gaining an interest in the human civilization, she soon wandered into the city and made it her new home.

With Wi-Fi and her trusty magic pouch, she now shares her hobbies online and hopes to make her own mob, full of friends!