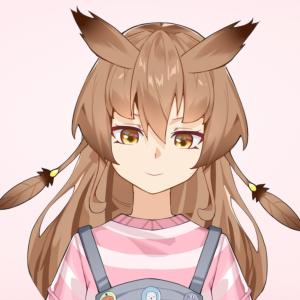 Mona is a confused and clumsy owl. In her streams she plays games. Mona's streams are in German, but viewers from other countries are also welcome. She prefers to play singleplayer games like The Sims 4, Stardew Valley or similar.

Mona hails from an owl family, which serves the greatest wizards since generations. The primary occupation of an owl is to serve as a messenger.

In the magical society, owls are often a symbol for the power and the talent of a sorcerer, because owls can sense the magical potential inside a person and are attracted by this magical power.

The status of wizards and witches in the magical community is measured by the amount of owls that he or she could gather around them.

Sorcerers who could turn into an animal for a short period of time are already a well-known phenomenon in the world of magic. But a young and talented wizard was obsessed by one question: Could an animal turned into a human, too?

He started his experiments with living field mice, that were caught by Mona during her nightly trips. After some explosive, and for the owl delicious, failures he reached his goal: Mona, the owl became Mona, the human. Currently this change seems to be permanent.