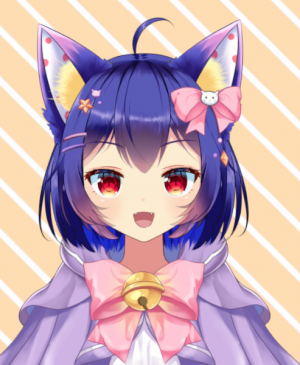 Momo Miyuki is a virtual cat streamer! On the surface she is full of love and compassion, encouraging her viewers to take care of themselves and showing her adoration for them! On the flip side, she is hyper and aggressive when gaming. Her potty-mouth may slip in a fit of frustration! She also loves to pull pranks on her friends and tease them. Her attitude appears very cat-like, and she really loves a good nap. She highly associates with lavender and wisteria flowers. Her streams vary between gaming, art, and just chatting.

Momo's only memories of where she came from were loud, noisy, and smelly. Her home would be that of a soggy, cardboard box. Her savior was a frail, older lady, who only happened to be in the city for her bi-weekly visit for groceries.

The old lady took the little kitten into her arms and drove far out to a beautiful, spacious world that would become the kitten's home.

After spending years with her beloved mistress, Miyu found that the old woman would not wake one morning. Sitting on the porch of the little house, Miyu called out for those who were nearby. Eventually, she grasped the attention of the young paperboy who would visit that day, always handing the paper directly to her mistress. Concerned by Miyu's behavior and the old lady not answering the door, he called for other humans.

They went in and got her mistress, left, and did not bring her back.

Many tried to catch Miyu, but she would not let them, for she had to be there when her mistress would return.

But days went by, and so did weeks, and none of them brought the old lady back. The paperboy visited again one day. He didn't try to catch Miyu, but she was cautious anyways. He sat on the porch and talked with the cat, telling her about the fate of the old lady, and mentioned where her nearby resting place was.

The next morning, Miyu set off on a mission and found herself in a beautiful cemetery, decorated with patches of delicate, purple flowers. And there, she found and sat with the grave of her beloved mistress, then curled up in the patch of flowers.

"What do I do now? What will become of me without her?" Miyu pondered until she closed her eyes and slept, where she was met with a dream of the old lady, who smiled upon her and asked Miyu to make as many people happy as she made the old lady in their time together. When she awoke in the lavender bed, Miyu was no longer an ordinary cat.