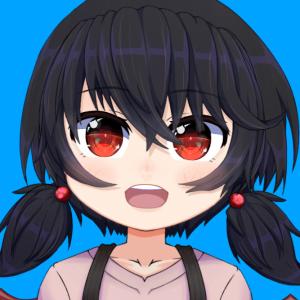 Rin Mitsumono, is a Half-Demon VTuber.

Compared to many other English Virtual YouTubers, Rin Mitsumono takes being a Virtual YouTuber to a whole other level, among the entire VTuber community, she's become a inspiration towards newbie VTubers, she's taught us all that there's more being a VTuber than just playing the role, it's about having fun and just being yourself. Debuted as a solo VTuber on March 15th, 2020 as a half demon from a small part of the universe (Demon Realm) along with her manager Kotaro.

Rin appears more relaxed and laid back talking all kinds of nonsense everywhere she goes. However, this only applies to her playing relaxed games such as Fall Guys and Minecraft in her streams, whenever something good happens, she get's hyped up and full of energy. Her fans see her as really fun, lovable and very cute, but she also worries her chat a whole lot due to her physical and mental health, where as she tries to stream as much as possible balancing both school and having a part-time job.

Despite her poor skills in gaming, she's very entertaining to watch, She'll continue to grow bigger and stronger to entertain as much people as possible through her streams.

A Half-Demon born from the mother of a demon and the father of a human, as a little girl her father sacrificed his own life just to save his wife and his only daughter, she grew up 500 years later with her home rebuilt and wanting to make the world a happier place and restore peace.