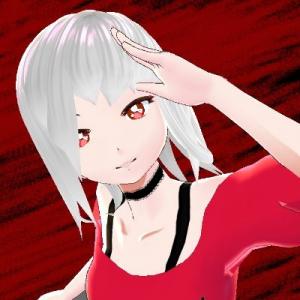 Mistral is female Vtuber mainly residing in Twitch, with occasional visits in YouTube. Her content is mainly jrpg and virtual card games with occasional flair of retro games and playing with viewers. Sometimes, when she is very brave, you might see her doing costume design. Mistral's favorite games are Pokémon, Final Fantasy XIV, Super Smash Bros. Ultimate and Shadowverse.

Following of slaying her father, Count Luca Celeste, the previous lord of Crystal Maze, Mistral took control of the palace one known as inescapeable trap all adventurers were afraid to enter. While she was examining the maze, the dhampir heard a faint voice from afar: "...hear..."

Interested about the voice, Mistral approached the voice. The voice was growing stronger. It was now clearly feminine. "Please... Someone hear me... Count Celeste trapped me..." Girl felt sorry for the strange voice. She knew Count had bad habit to imprison his enemies and torture them. Mistral hurried to prison area. Behind the locks, there was a strange humanoid creature with single black horn and white fur wearing a toga. A fox? Definitely not. Wolf? Sure not. Not really sure what she was, but definitely resembled like that creature she loved in certain video game... Absol.

Mistral approached the stranger. "Who are you? Don't worry, I'm not an enemy." The creature was clearly scared of her. "Red eyes, silver hair and the sharp teeth. You're definitely not Count Luca but resemble him... It scares me." Dhampir sighed loud. "Of course I resemble him, I'm his daughter!" The creature got interested. "Daughter? So it means you're the vampire slayer Lucinda Celeste? Count Luca often mentioned that name." Mistral got slightly annoyed. "Mistral Lucinda Celeste! That trash has always refused to call me with the name my human mother gave to me, telling it's unfit to vampire." Creature showed again a sign of interest. "Human? So that means you're actually not a vampire but instead dhampir. Interesting... Could you free me, I can teach you to control Crystal Maze. In condition you use the power for greater good."

Mistral smiled a bit. "Greater good? I like the sound of it. Restoring Crystal Maze into original glory and use it to entertain and give joy to people." She opened the lock so the creature could get free. "By the way, do you have any name?" Absol was puzzled. "Name? No... for centuries I have been called only 'you' or 'thing'. No one have ever asked me my real name. I don't have one I guess." Dhampir thought a bit. "So, if you don't mind, can I call you The Overseer. I mean, you're the one who can control the Maze." Creature was tasting the name in her mind. "Over... Seer? I like it. Overseer!"

After releasing the Overseer, the duo still have a lot to do with Crystal Maze Restoration project and they need all the support the world is able to give!