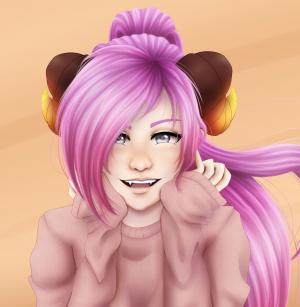 MissVyris is mainly an AdventureQuest 3D VTuber/VStreamer on YouTube, but does variety on Twitch every once in a while. Her content is aimed at mature audiences with innuendos and a lot of swearing.

Vyris is a half fire dragon, born on top of mount Ashfall. In order to challenge the most powerful dragon, Akriloth, she set out on a journey to take the throne and rule the mountain. After a long battle, Vyris was victorious. However, she came to love adventure and decided to travel the world and become even stronger instead of becoming the ruler of Ashfall.

Vyris is sometimes referred to as the dragon queen, even though she's equal part human as she is dragon.