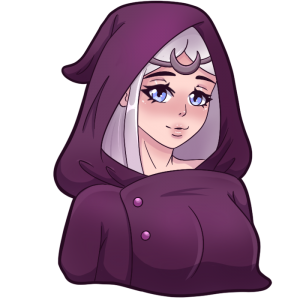 Faye is a female English virtual witch/ succubus content creator on Twitch, she is also on Twitter too. She plays many games such as horror games & sometimes cozy ones like Minecraft & House Flipper. She loves hanging out on Twitch to stream during late hours of the night; her streams are 18+.
Faye is a shy, quiet type; she is a sweet witch, making jokes and being corny and even a bit lewd with her sense of humor. However, she is way more than just that; to her community and strangers that meet her, she is more of a mother to all; she is mature and wise, friendly to everyone, most do not know Faye is a succubus.

Faye pottered around the kitchen, keeping a sharp eye on her stove where a boiling pot of potatoes was resting. She walked onto her front porch, catching a glimpse of herself in the mirror as she walked past- her hair was an icy white, like the purest of parchment, it cascaded down her back like a free flowing waterfall, curling in dainty ringlets at the end. She smiled as she looked herself up and down in the gold plated mirror…centuries old, and she still had it. Her wide eyes were the blue of a thousand oceans, carrying an intimate love for the world. As she sat down on the stairs of her porch, the wind wrapped around her, the chill of pure ice engulfing her in the most horrific intimacy. The chill reminded her of her time in the old coven. Her and her friends had created so much terror…she giggled at the memories of lighting her grans crops on fire and toppling water buckets over with a singular blink. She missed her time there more than anything, hiding from the coven leaders past midnight so she could sneak out to the river with her boyfriend, her husband…well her ex-husband. He passed away about a decade before she moved out to her quaint little cottage. They used to catch frogs under the moonlight and release them together at dawn, as they got older, they kept the same tradition. Every full moon, they would go to the river and catch as many as they could-it never got old. She pushed herself up from the stairs and wandered back into her cottage, the sweet aroma of food filling her nostrils. She let her eyes drift to the framed photograph of her best friends on the wall, their wide smiles brought her a strange amount of joy, they used to do everything together but then they all went their separate ways, Faye went off to magic academy and the other girls drifted off to other parts of the world to learn alchemy and shapeshifting. She fondly remembered the time her friend Poppy shifted into a cat and snuck into the kitchens, stealing cinnamon buns for all of them…it wasn’t the worst thing in the world having a shape shifter for a friend, she dreamt of the day she would get to see them again. She gobbled down her dinner like some kind of feral beast and got into bed, taking dep breaths and letting the setting sun warm her cheeks. She practically jumped out of her skin at the feeling of something jumping on her bed but laughed when she saw it was her cat- Jaxy. Jaxy was even older than Faye…he had been her companion since she was a little girl, he was almost like her protector, not always in sight but never far away. He snuggled up to her chest, purring loudly. As they drifted off to sleep, Faye dreamt of catching frogs at the river with her husband and smiled, waiting for what tomorrow would bring.