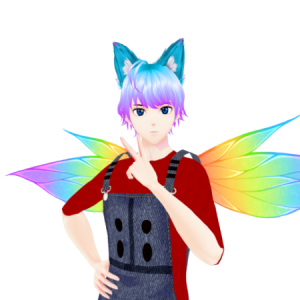 MikiYuki is an English Twitch streamer who enjoys playing gacha games. Miki usually streams with his 3D model on, but sometimes due to lag, he uses a reactive PNG.

MikiYuki was created in a secret laboratory by scientists that wanted to make a very powerful creature so they could have real powers in the world, but there was one female scientist in particular that wanted to help him learn about the world and set him free. Unfortunately, when the female scientist had planned to take MikiYuki away from the lab, the lead scientist had put MikiYuki into the final test. In that test, MikiYuki had lost control of his abilities and went on a rampage killing everyone in the lab and once he snapped back to reality he realized the damage that he had done. In a frantic manner, he ran to the side of the female scientist who had her life slowly fading away. Before she drew her final breath, she gave MikiYuki an emerald hair clip and rainbow gem pendant. She explained that these two items would hold back his powers so that nothing like what unfolded today would ever happen again. As he accepted the parting gifts from the scientist, he held her close as she slowly passed away. Without knowing what to do with himself after the events that just unfolded, MikiYuki exited the lab and walked into the unknown.